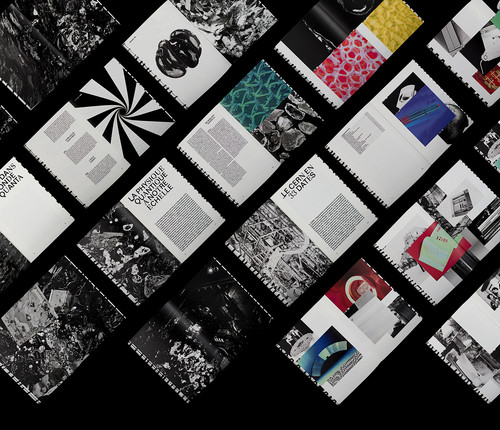 Intramonde is a book about quantum physics. The project has been developed by Lausanne based graphic designer Thomas Le Provost with the help of Nicolas Brunner, professor at the Department of Applied Physics at the Faculty of Science of UNIGE and responsible for the theoretical aspects of the new research. The aim of the book is to make available to a larger audience how quantum physics questions our perception of reality. Using algorithmic coding for the layout and the typefacing that support the popularizing texts, the designer produced ten different books to translate the fundamental principle of quantum physics, randomness of measure.

Thomas Le Provost has a deep interest for science and his previous books deal with further topics rooted in hard sciences, but also for publishing technologies as all books are completed with augmented reality applications: Outremondes is about the borders of sciences, while Omens works as fictive, multidimensional report published by The Centre for Study and Existential Risk at the University of Cambridge, and ISS is an book where each double spreads presents the 342 days spent by astronaut Scott kelly while his twin borther Mark was on Earth.

Le Provost obtained his BA in Graphic design with Excellence from the ECAL in 2017, and before that interned at John Morgan Studio, London and Roosje Klap, Amsterdam.

Can you describe your approach or methodology to design?
I’m trying to adopt a wide, transdisciplinary approach in every creative process. It allows me to enrich and explore new territories. It also helps to find an appropriate form for each project.

Did recent technological changes impact your work? If so how?
Yes, absolutely. Every technological advancement introduces a broader spectrum of possibilities, that’s why I find it so stimulating to work with new technologies.

What inspires you? Can you describe an event that recently inspired you?
The connection between fiction and reality, science and art, technology and sociology, environment and progress.

With what company would you like to work with?
The CERN.

You are using an outdated browser.
Please upgrade your browser to improve your experience.